skip to main | skip to sidebar
Home » Animals » Why do chimps paint?

Why do chimps paint?

(Video link) In his Big Think lecture, "What is Art?" Bard College president Leon Botstein makes the assertion that art is a distinctly human activity, unique to our species. This is a rather antiquated notion, one that scientists began to disprove 50 years ago. 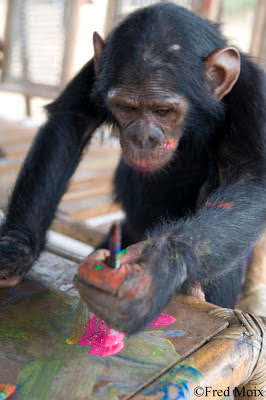 It turns out that several kinds of animals make art. And their art-making behavior fits the definitions of art that Mr. Botstein proposes. These species range from birds, elephants, cetaceans, and most particularly, gorillas and chimpanzees.
One of the pioneering scientists in this field is Desmond Morris (born 1928), who wrote the 1963 book "The Biology of Art: A Study of the Picture-Making Behavior of the Great Apes and its Relationship to Human Art."
Morris worked with a chimpanzee named Congo from the London Zoo. Congo picked up some art supplies and rapidly became obsessed with the experience, favoring it over eating or sex. 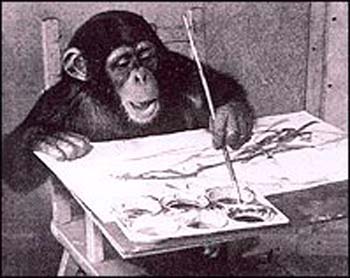 Congo's artistic behavior appeared strangely human. Many of the design motifs he used were similar to those used by human artists. Morris said, "To put it simply, the position of one line influenced the position of the next line, and so on, until the drawing was considered (by the ape) to be finished." 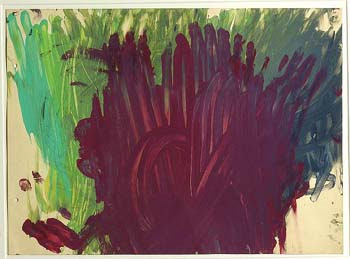 Congo got angry when Morris tried to take away a painting before he was finished working on it. Morris says: “In tests with Congo it was repeatedly clear that he had a very distinct concept of when a drawing or painting was finished. On the rare occasions when attempts were made to encourage him to continue working on a picture that he considered ‘finished’, rather than on a new one, he lost his temper, whimpered, screamed, or, if actually persuaded to go on, proceeded to wreck the picture with meaningless or obliterative lines.”
When Congo was “paid” with a treat for doing a painting, he started to lose interest in the work. This paradoxical behavior mirrors what happens with human children and adults. Rewards and praise have been shown to have a chilling effect on creativity and output.
Morris summarized his observations into the six "biological principles of picture making."

1. The principle of Self-rewarding Activation The act of painting yields satisfaction apart from materialistic rewards.

2. The principle of Compositional Control When faced with a choice, chimps (and also capuchin monkeys and birds like jackdaws and crows) will select a more orderly arrangement of shapes. Given the tools to make marks, their pictures follow classic principles of balance and rhythmic repetition.

4. The principle of Thematic Variation Visual themes such as fan patterns emerge and go through variations, later to be replaced by different themes.

5. The principle of Optimum Heterogeneity There seems to be a preferred optimum between maximum simplicity and maximum complexity (a mass of random, fussy detail)

6. The principle of Universal Imagery Drawings of chimps seem to resemble humanoid faces not unlike those made by human children. In children from around the world, there are universal features to their initial and most basic drawings of houses and figures.
Congo did over 400 paintings. His work was noted by art critics such as Waldemar Januszczak. Picasso collected his work. One of Congo's paintings sold for US$25,000. Salvador Dali declared: ''The hand of the chimpanzee is quasihuman; the hand of Jackson Pollock is totally animal!" 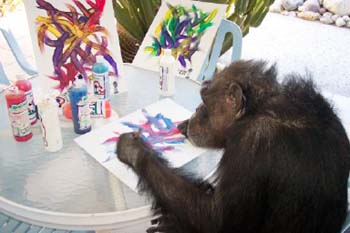 Since Congo's heyday, other chimpanzees have taken an interest in artwork. One of them, named Cheeta, did a lot of paintings during his Palm Springs retirement from acting in the Tarzan movies. He took pride in his work, signing it with a fingerprint.
Further reading
More about Cheeta at this link (scroll way down).
Image of chimp painting from Creative Thinking
Other images from "Chimpanzees as Artists" on Artist's Ezine
Previously on GurneyJourney:
Chimp and Elephant Art (videos and samples), "Gorilla Portraits", "Animals are not Fauvists"
Morris's book: The Biology of Art: A Study of the Picture-Making Behaviour of the Great Apes and Its Relationship to Human Art

Thanks, Richard Roth
You have just read the article entitled Why do chimps paint?. Please read the article from Sentimental Journey About Animals more. And you can also bookmark this page with the URL : http://sentimental--journey.blogspot.com/2013/03/why-do-chimps-paint.html