This one-of-a-kind doll prototype was made in 1997 by the Hasbro toy designers for a proposed Dinotopia toy. 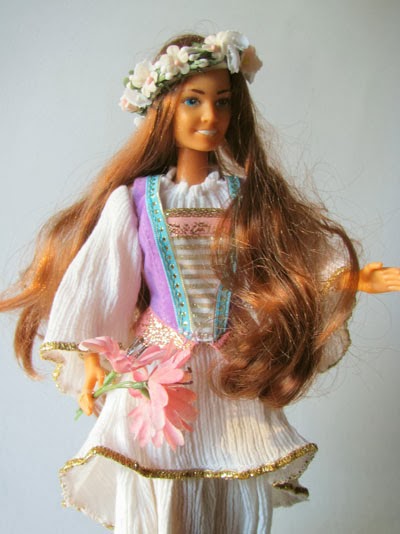 She is the red-haired character Sylvia in ceremonial costume, with a coronet of flowers and a tiny handmade vest that fastens in the back with Velcro. Her dress is a crinkle cotton gauze made to look like pleated linen, with gold trim. We liked the way she is dressed in a timeless and modest way, and her face has a sweet smile. 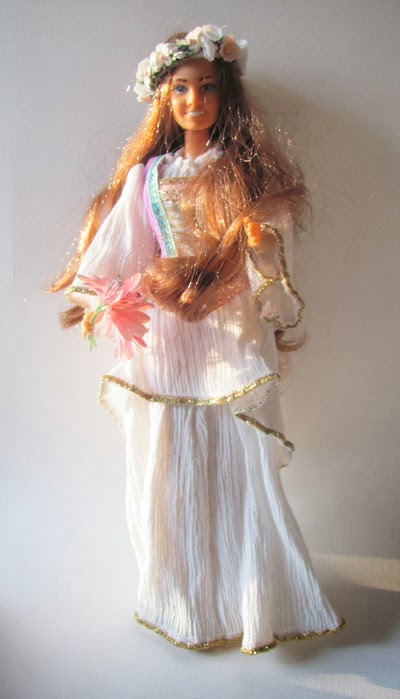 This is not a reconfigured Barbie doll; it's completely unique and original, custom made for Dinotopia.

Although the Dinotopia toy line never went into production due to reversals in the movie project at Columbia, Hasbro's toymakers made a beautiful group of proposals, and their marketing people were excited about the prospect of that rare thing: a toy line designed for both boys and girls.
------
Sylvia appeared first in Dinotopia: A Land Apart from Time

in 1992.
Thanks, Michael Stone and Robert Gould.
You have just read the article entitled Sylvia doll prototype. Please read the article from Sentimental Journey About Dinotopia more. And you can also bookmark this page with the URL : http://sentimental--journey.blogspot.com/2014/01/sylvia-doll-prototype.html