My eighth grade art teacher, Mr. Kinear, asked me to come up to the front of the classroom. He turned me to face the class and put the question to me in his big public voice:

"Jim, would you be willing paint a picture up here in front of the whole class?" 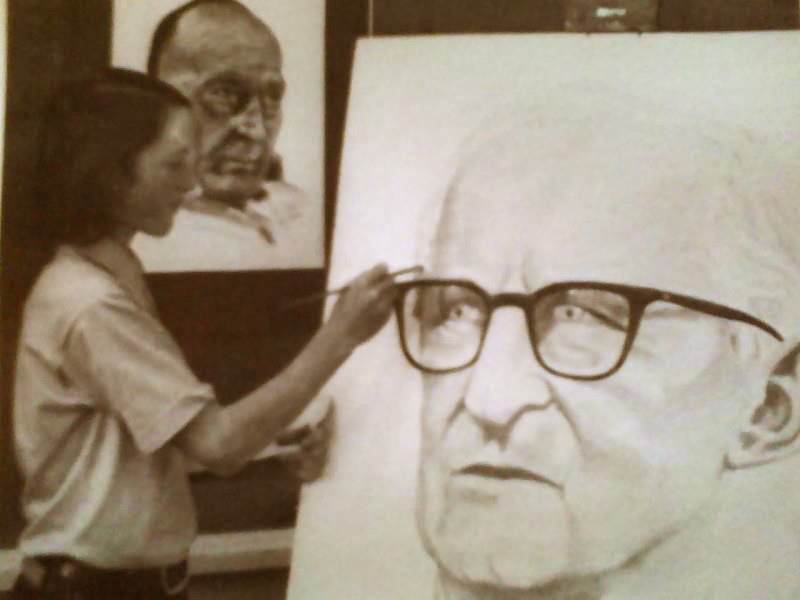 "Um. Sure," I said. My reflex was to say yes first and dig myself out later.

He dragged his easel, squeaking horribly, across the linoleum floor. He started twirling the cranks and the top went up like a guillotine. Everyone set down their pencils and stopped working on their contour drawings.

I was the entertainment.

Suddenly I wanted to rejoin my peers, blend in, and become invisible again.

There was another problem. I had no idea how to paint a portrait in oil. I had never painted anything in oil. No one in my family painted, at least not since I was born. I had seen a few tubes of my mom's old paint box, but I couldn't even get the caps off. I didn't know how to mix colors or thin the paint or how to use the brushes. I never saw anyone do an oil painting. Middle schoolers didn't paint in oil. We used charcoal or ink or poster paint.

"Don't worry, I'll get you set up," Mr. Kinear said, sensing my rising panic. He took out his personal tubes of paint and uncapped each one with a grand flourish.

"Viridian...Alizarin...Burnt Sienna," he said. I was hearing some of these names for the first time. I didn't dare admit my ignorance to him. He had chosen me as the star student. This was my chance to shine and to impress the girls, because I was way too shy to talk to them.

What was I supposed to paint? Mr. Kinear handed me a photo of a retired principal. He was a rather hard-faced old bird, not exactly a favorite with the students, and certainly not with me. I had been called into his office a couple of times on minor infractions, and he seemed to me rather short on humor or sympathy.
I brushed my long locks of hair back over my ears and tried to focus. I had been to an art museum a few times and had seen a Rembrandt. I had seen Norman Rockwell's book on illustration. Those guys used oil, didn't they? If they could do it, why couldn't I? 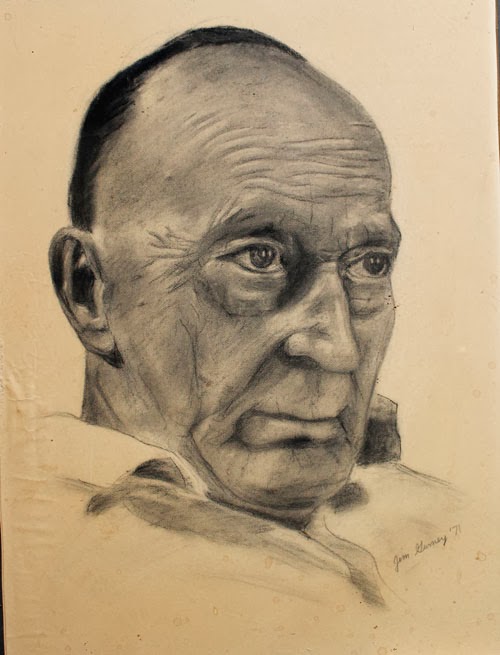 I had drawn some faces before. Above is a charcoal portrait that I did at home to show Mr. Kinear. My idea of a portrait was to make the face really big so that it filled most of the frame. I knew I could draw fairly accurately.

I started by drawing the face with a pencil. Then, as the class watched my every move, I squeezed out the paints and started mixing and dabbing on color. How do you mix a flesh tone? It wasn't pink exactly. I tried mixing burnt sienna with white: white to make it lighter and black to make it darker. The principal was taking on a ghoulish pallor.

I had a lot of trouble with his eyes. Everything I did made him look more and more like a turkey vulture, glaring back at me in a hungry sort of way, like he wanted to pick the flesh off the bones of my carcass.

After a couple of weeks of effort, I finished. I was surprised when Mr. Kinear declared the final painting a success. Newspaper reporters came and took photos. It was decided to hang the finished portrait in the cafeteria, high up on the wall, where the principal could cast his gaze down over everyone eating their lunches. I was proud, but also embarrassed when I stood there in front of everybody for the unveiling. I was a hero. The girls liked me, and it was all because of my art.

The next day, my pride came crashing to the ground when I came into the cafeteria, and saw that my portrait had been the target of a food fusillade. Big hunks of bologna stuck with mayonnaise to his cheek. Strings of spaghetti festooned his forehead.

I never really knew if they messed up the portrait because it was a poor painting, or because he was a poor principal, or just to pay me back for being the head student. Probably a little of all three. It was my first taste of public opinion, and I learned a very important lesson: The nail that sticks up above the rest will get hammered down first.

You have just read the article entitled My Eighth Grade Portrait Disaster. Please read the article from Sentimental Journey About Portraits more. And you can also bookmark this page with the URL : http://sentimental--journey.blogspot.com/2014/01/my-eighth-grade-portrait-disaster.html