Happy New Year, everyone. One of the things I'm excited about in 2014 is the release of a greatly expanded new edition of Dinotopia: First Flight

from Dover Publications. The book will be coming out this April. 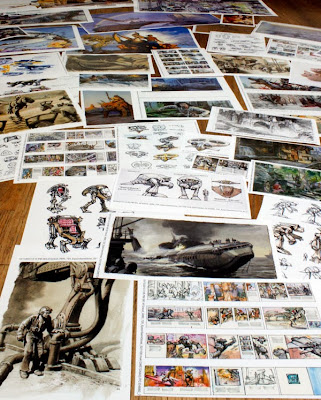 I just finished checking the proofs. Here's what my studio floor looks like. This new edition is going to be very lavishly produced, beginning with an unabridged republication of my 1999 story about Gideon Altaire, one of Dinotopia's early heroes who learns to pilot a giant pterosaur to challenge the mechanized empire of Poseidos.

The second half of the book includes a bonus of over 45 new images, including never-before-published storyboards, concept art, vehicle designs, and backstory illustrations, many of which I created just for this edition.

The written part of the new supplement fleshes out some of Dinotopia's turbulent origin stories during the ancient period known as the "Age of Heroes." We'll include a cinematic treatment that I wrote about a character named Blake Terrapin, who leads the resistance on the ground while Gideon takes to the air. 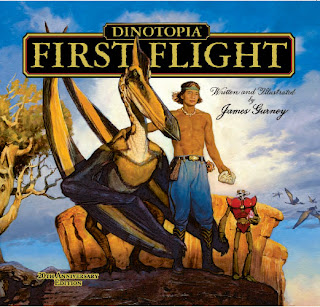 The relatively peaceful world that you may know from the other three books was forged on the flames of conflict, where human and saurian alliances were severely tested, and unlikely heroes emerged to face off some of the greatest challenges ever to threaten Dinotopia.

I'll share some of the new artwork in future posts as we get closer to the release date.

Meanwhile, you can get the other three Dinotopia books from Amazon

or order them from my online store:
Dinotopia: A Land Apart from Time
Dinotopia: The World Beneath
Dinotopia: Journey to Chandara
You have just read the article entitled New edition of "First Flight" coming in April . Please read the article from Sentimental Journey About Dinotopia more. And you can also bookmark this page with the URL : http://sentimental--journey.blogspot.com/2014/01/new-edition-of-flight-coming-in-april.html