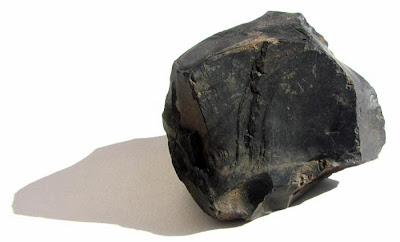 No, Santa didn't leave this lump of coal in my stocking. It once belonged to the American landscape painter Albert Bierstadt (1830-1902), and it came from the site of his ruined mansion Malkasten. 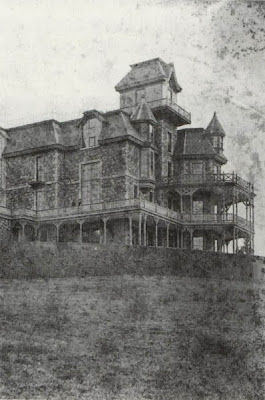 The homesite had a magnificent view of the Hudson River, painted here by Bierstadt looking northwest. The view doesn't look like this anymore. It's on a vacant plot of land between two 20th century buildings, and the foundations are overgrown with trees and choked with vines.

A friend brought me there to check it out. You can still see the front steps, a gatepost, and a couple of wall foundations, but that's all. 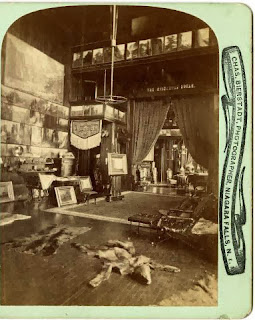 In Bierstadt's day, the studio was lined with his large panoramic paintings, and the many plein air studies he painted on his travels to the American west. You can see the studies lining the mezzanine and the wall at left. 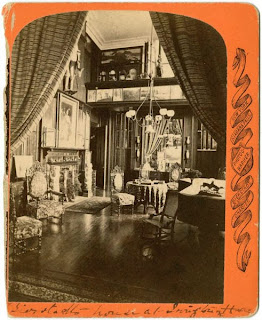 The home had fine furniture purchased during Bierstadt's years of great success, though by the time he built Malkasten and inhabited it, his career was beginning to decline. 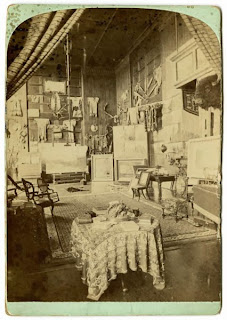 The three-story tall studio was spacious and filled with light, with high ceilings and sliding glass windows 20 feet high. The studio, library, and music room had big doors and curtains that could open to create a single space 70 feet long, so that he could step way back and view his huge paintings.

But as the years progressed, Bierstadt's work became less popular, his wife was in ill health, and he spent less time in the house. The New York Times noted that the taxes and upkeep expenses were astronomical. 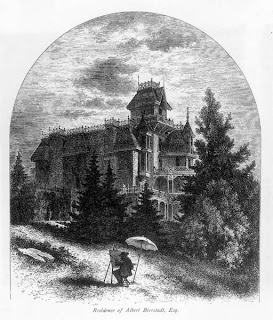 In 1882, a fire consumed Malkasten and all its contents. Bierstadt was not there at the time, the studio was locked up, and the place had been rented. Two major paintings and countless studies and engravings were lost forever in the fire, along with the mansion itself.

Fortunately, the studios of some of Bierstadt's contemporaries, such as Frederic Church, Jasper Cropsey, and Thomas Cole, are still intact, and open to visitors.

Read more about the original mansion or how the site looks today, courtesy of Rob Yasinsac, author of Hudson Valley Ruins: Forgotten Landmarks of an American Landscape

.
Thanks, Chris.
You have just read the article entitled Bierstadt's Malkasten. Please read the article from Sentimental Journey About Academic Painters , Hudson River School more. And you can also bookmark this page with the URL : http://sentimental--journey.blogspot.com/2014/01/bierstadt-malkasten.html