After yesterday's post about the Pre-Raphaelite love triangle, Greg Shea, who works at the Yale Center for British Art, sent this intriguing sketch by John E. Millais.

It shows two sketchers, puffing on smokes, with bags over their heads, with eye and mouth holes cut out to keep out the biting flies. In the distance, a shocked family looks on. 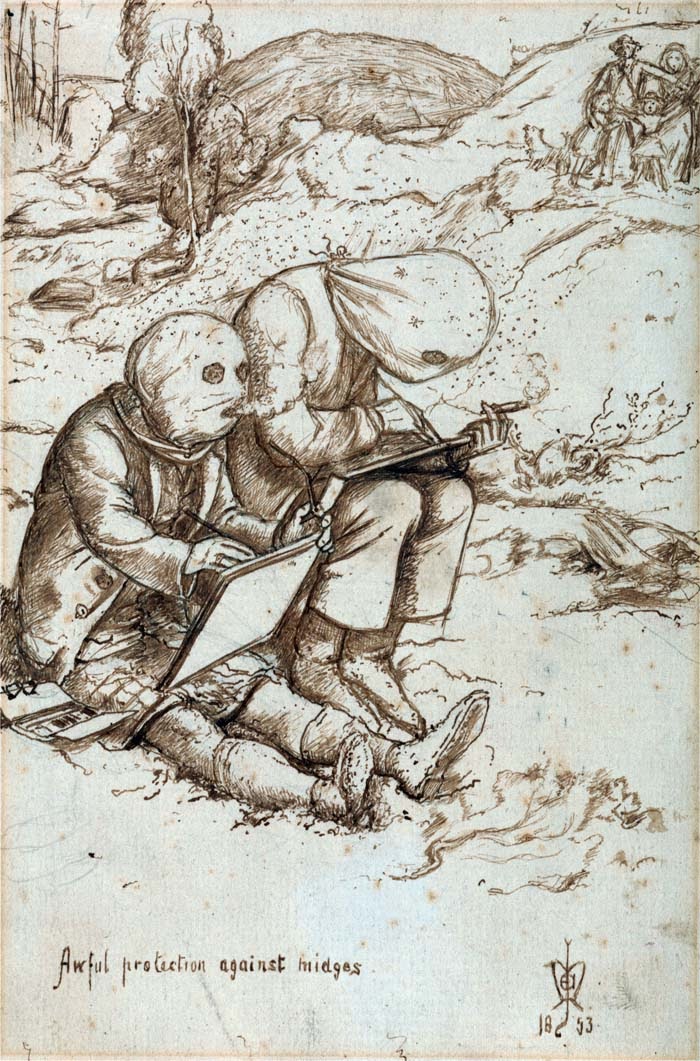 It is titled "Awful protection against midges," and it illustrates a moment from the sketching trip to Scotland Millais took with Ruskin and his wife Effie.
According to the Leicester Art Galleries:
"This drawing comes from a series of about twenty-five amusing records that Millais made as a visual diary of his stay in Scotland with John Ruskin and his wife Effie. It was on this holiday at Brig o’Turk, taken between July and October in 1853, that Millais painted his famous portrait of John Ruskin standing beside Glenfinlas Falls and became deeply infatuated with his wife, Effie. Millais was an avid fan of the humorous magazine Punch and on returning from Scotland he showed the results of the lighter side of his trip (his relations with Ruskin having become naturally somewhat strained) to his friend, the Punch cartoonist John Leech. Although Millais was delighted to see his sketches published he asked for them to be anonymous. The images “would never go with the serious position I occupy in regard to Art”.
"Awful Protection Against Midges was published on the 12th November 1853. It appeared with the title Ingenious protection against midges - a valuable hint to sketchers from nature. Simplified by Leech for the wood block engraving, the Punch illustration lacks the delicate detail of the original drawing. Millais had written to his friend Martha Combe from Brig o’Turk on the 6th September describing this well-known Scottish pest. “There is one drawback to this almost perfect happiness - the midges. They bite so dreadfully that it is beyond human endurance to sit quiet, therefore many a splendid day passes without being able to work”. Martha and Thomas Combe were important Pre-Raphaelite patrons.

"The kilted figure on the left is Millais’ pupil and friend, the artist Michael Halliday in his adopted native attire. On the right may well be Millais himself, however Millais usually portrayed himself with exaggerated gangly legs and arms. An alternative candidate is Millais’ brother William, who can be seen sketching in another of the drawings smoking a similar cheroot. William’s favoured pastime was trout fishing for breakfast."
You have just read the article entitled Protection Against Midges.. Please read the article from Sentimental Journey About Plein Air Painting more. And you can also bookmark this page with the URL : http://sentimental--journey.blogspot.com/2014/03/protection-against-midges.html