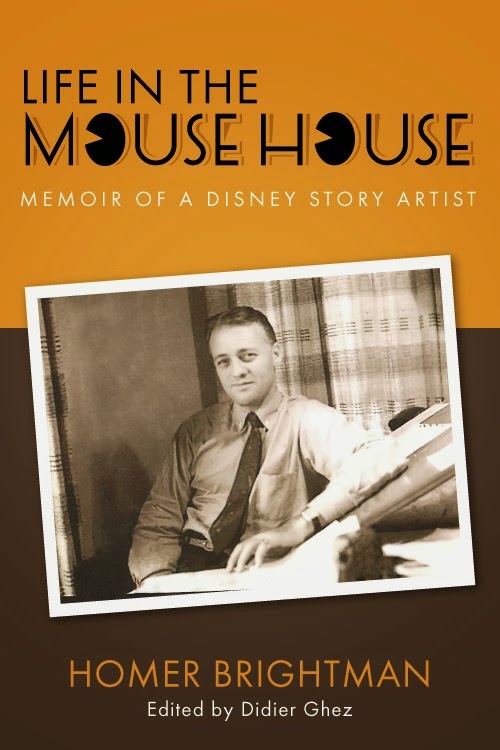 I just finished reading Life in the Mouse House, a memoir

by Disney story artist Homer Brightman. It's an unflinchingly honest look at the Disney Studios during the golden years of 1935-1950.

It's a lively read, full of anecdotes about pranks and office politics, and it gives an unsparing portrait of Walt Disney himself. Brightman acknowledges that Walt was a great pitchman and story man, a driven perfectionist who pushed the art of animation forward.

But he was also a difficult guy to work with. Brightman's anecdotes portray Walt as touchy, lonely, suspicious, and unforgiving, meting out underhanded punishments even to his loyal employees.


The memoirs explain the causes and consequences of the famous animator's strike in 1941. One of the sore points, Brightman explains, was that on the heels of the huge success of Snow White, Disney announced to the press that he would be sharing profits from the film with the employees. But instead of giving out bonuses or raises, he gave a party where he used the moment to chastise them and exhort them to work harder.

Brightman's recollections were lost for a long time, but they were recently rediscovered by his descendants. Other artists on the studio staff are mentioned by pseudonyms in the memoir, but historians have figured out who they are, and there's a key in the book so Disneyphiles can figure out who's who.
------
Photo courtesy Disney History.com, ©Disney
Preview the book on Amazon: Life in the Mouse House: Memoir of a Disney Story Artist

You have just read the article entitled Book Review: Life in the Mouse House. Please read the article from Sentimental Journey About Book reviews more. And you can also bookmark this page with the URL : http://sentimental--journey.blogspot.com/2014/03/book-review-life-in-mouse-house.html