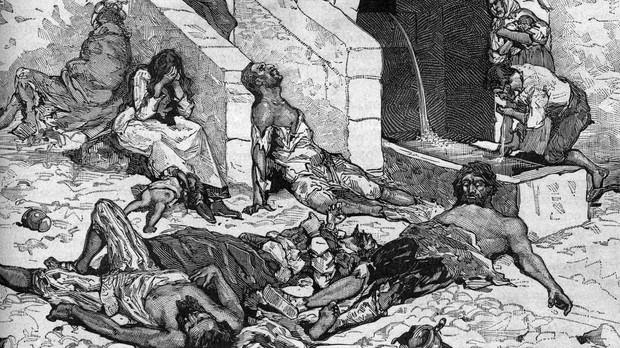 When the disease known as the Black Death or the Great Pestilence arrived in London in the mid- 1300s, it wiped out more than half of the population. As a result of excavation for a high speed rail project, archaeologists have recently discovered a mass grave of people that died of the plague. Using modern forensic techniques, they're able to learn more about what life was really like in the Middle Ages:

"• Many of the skeletons appear to suffer signs of malnutrition and 16% had rickets.
• There is a high rate of back damage and strain indicating heavy manual labour.
• The later skeletons from the 1400s had a high rate of upper body injury consistent with being involved in violent altercations.
• 40% grew up outside London, possibly as far north as Scotland - showing that 14th Century London attracted people from across Britain just as it does today."

-----
Read more on the BBC: Black Death Skeletons Unearthed by Crossrail Project
Image from Den of Geek
You have just read the article entitled Archaeological dig reveals life and death in 14th century London. Please read the article from Sentimental Journey About http://sentimental--journey.blogspot.com/2014/03/archaeological-dig-reveals-life-and.html