Yesterday, the Delaware Art Museum announced the launch of its online collections website. Now, over 1000 examples of its trove of Golden Age Illustration and Pre-Raphaelite paintings is available for anyone in the world to view and study.

Each painting has a story. Let me tell you one.

John Everett Millais painted this careful study of a woman beside a stream during a painting trip to Scotland. The woman is Effie (Euphemia) Gray, the wife of John Ruskin. Ruskin was a famous art critic who championed the idea of painting nature in all of its abundant detail, and he was an artistic mentor to Millais.
During the long days that it would have taken to paint this picture, one can imagine John and Effie getting to know each other. Effie was unhappy in her own marriage to Mr. Ruskin, in part because of a very awkward situation that unfolded on the Ruskin's wedding night.
Until his marriage, Ruskin's idea of women's bodies had derived from his encounters with classical statues and paintings. Confronted by the reality of Effie's nude body on the wedding night, he was shocked and dismayed.
No one knows for sure what exactly blew his mind: it might have been either the pubic hair or the menstrual blood. Some have argued recently that the sensual reality of woman's body conflicted with Ruskin's mental image of an idealized young female. The way Ruskin put it later at the annulment proceedings: "It may be thought strange that I could abstain from a woman who to most people was so attractive. But though her face was beautiful, her person was not formed to excite passion. On the contrary, there were certain circumstances in her person which completely checked it." 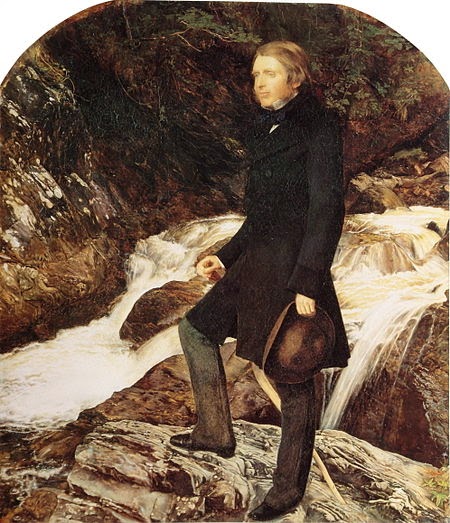 Millais and Effie had fallen in love, but this led to a big problem, because the whole point of the Scotland trip was for Millais to paint a standing portrait of Ruskin in a natural setting. Having established the natural backdrop, Millais returned to London, where Ruskin posed for him in the studio. Millais called it "the most hateful task I have ever had to perform."
After the portrait was completed, Ruskin and Millais broke off relations, and Ruskin's marriage was on the rocks. Effie, still a virgin, sued for annulment.
Ruskin may have been turned off by Effie, but Millais wasn't. They married in 1854 and had eight children together.


This spring, a film dramatization called "Effie" will be released. The script by Emma Thompson promises to explore the fraught relationship between Gray, Ruskin, and Millais. (Thanks, Dana)
View the Delaware Art Museum collections website
Detailed discussion on Wikipedia about Ruskin's sexuality, and theories of the wedding night
You have just read the article entitled Pre-Raphaelite Love Triangle. Please read the article from Sentimental Journey About Academic Painters , Golden Age Illustration more. And you can also bookmark this page with the URL : http://sentimental--journey.blogspot.com/2014/03/pre-raphaelite-love-triangle.html