One of the realist landscape painters that maintained high standards through the dark ages of mid-20th century America was Ogden Pleissner (1905-1983). Trained at the Art Students League under Frank Dumond, he enlisted in the military and painted firsthand scenes from World War II, and then painted hunting, fishing and travel scenes for the rest of his career. 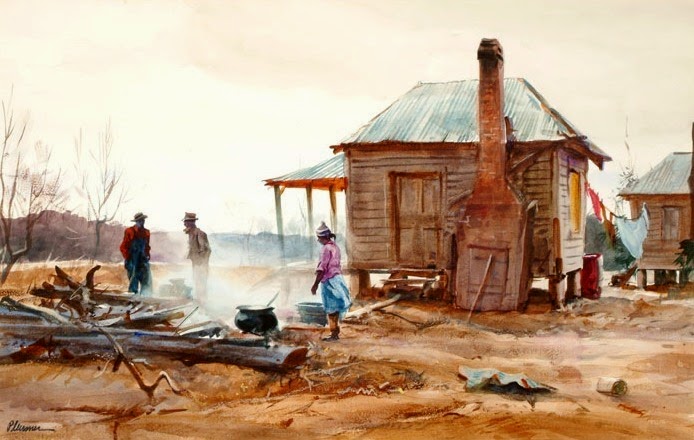 Six of Pleissner's originals are currently on display in a small exhibition at the Arkell Museum in Canajoharie, New York, and we went to check out the show yesterday. His painting "Cold Day in January" is a large watercolor of a domestic scene in the rural American South.

The smoke from the cooking fire is beautifully handled in wet washes. As with Sargent's watercolors, there is some lifting out, some wax resist, and some gouache, such as in the laundry at the right.
There are three oils, too, all magnificent in design and execution. The circus painting shows the backs of six elephants, with a peek at the behind-the-scenes activity of a traveling circus glimpsed through the spaces.
If you go to the Arkell, don't miss the 1939 advertising art that Norman Rockwell painted for Beech Nut gum, plus the Arkell's small permanent collection, with samples of Sargent, Homer, Duveneck, Dewing, and Tarbell.
-----
The Arkell Museum's Ogden Pleissner exhibition: "Watercolors and Oil Paintings from the Arkell Collection" through June 1, 2014
Another place to see Pleissner paintings is at the Pleissner Gallery at the Shelburne Museum in Vermont.
The best book on Pleissner is Art of Ogden M. Pleissner

, from 1984, and it's amazingly affordable.
You have just read the article entitled Ogden Pleissner Exhibition. Please read the article from Sentimental Journey About http://sentimental--journey.blogspot.com/2014/03/ogden-pleissner-exhibition.html