Imagine a giant fish-like ship, burning and sinking, with its surviving crew straggled along the top, waiting to be rescued. 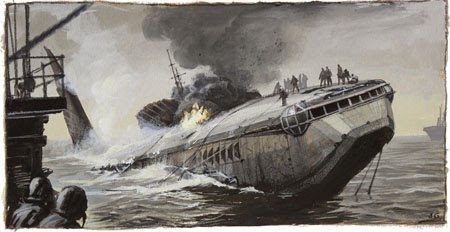 I did this gouache painting last year. It's called "The Sinking of the Hagfish," part of a new round of backstory development of Dinotopia.

The scene is set thousands of years ago in Dinotopia's Age of Heroes, when human and saurian rebels challenged the invasion from Poseidos. 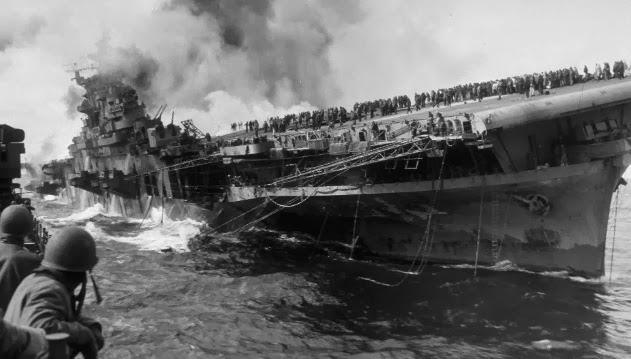 The inspiration for this composition came from this historic World War II photo of the burning carrier "Franklin" off the coast of Japan after it was struck by two bombs. Over 772 of the crew were lost, but the ship returned to port on its own steam.

In my composition, I kept the figures on the far left watching the unfolding drama. The feeling that we're among those watching adds a sense of vérité to the science fiction image.

, which you can get used for less than $5.00. It's a large volume, crammed with black and white photos, showing many aspects of the the war. The documentary photos stimulate visual ideas that go beyond the cliché fantasy battle images, particularly showing the consequences of war.

My painting will appear in the upcoming expanded edition of Dinotopia: First Flight, from Dover Publications, which is slated for mid-April.