Winsor McCay (c. 1867-1934) was famous for his contributions to comics (Little Nemo) and animation (Gertie the Dinosaur), but those achievements were related to his other career as a lightning sketch artist on the vaudeville stage. 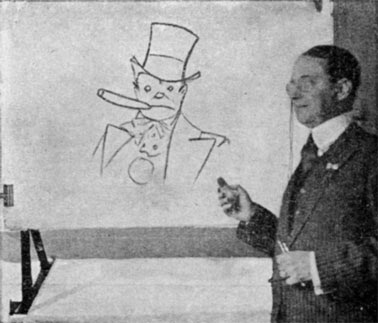 "Impresario F. F. Proctor approached McCay in April 1906 to perform chalk talks for the vaudeville circuit. For $500 per week he was to draw twenty-five sketches in fifteen minutes before live audiences, as a pit band played a piece called "Dream of the Rarebit Fiend". In his "The Seven Ages of Man" routine, he drew two faces and progressively aged them. His first performance was on June 11, 1906, in a show that also featured entertainer W. C. Fields. It was a success, and McCay toured with the show throughout 1907, while managing to complete his comic strip and illustration work on time, often working in hotel rooms or backstage."


In 1911, McCay animated his Little Nemo characters, in the context of a lightning sketch artist's show (Video link). After making a wager with the guys in the smoking club that he can make drawings move, he proceeds to draw his characters on a big pad, just as he would have done on stage, before he switches to smaller drawings for the animation. You can skip ahead to 8:24 to see the start of the animation.


When he presented his famous animated film of Gertie the Dinosaur, (shown here in its shorter version) McCay stood beside the screen and talked to the animated dinosaur, who seemed to respond to his commands and his scolding. Seeing a lightning sketch artist interact with a drawing which moved and even emoted at his command must have been astounding. Here's the longer version of the film, with the full setup intact.