A scintillating scotoma is an optical effect related to migraines, where a glowing aura forms in the visual field, like a shimmering ring or arc that lasts about 15 minutes. 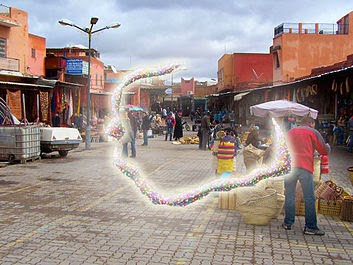 Here's an artist's depiction. In my experience, the ring expands slowly outward from the center, and it is composed of zigzag patterns that move around the ring, rather than little colored bubbles, as is indicated here. The aura creates a blind spot in the area of the shimmering ring. At the Wikipedia page on the subject, there are some animated gifs that people have created to simulate the effect.

Whenever I get one, I refer to it as the "Mystic Donut."


Here's another animated simulation (Thanks, Derek).

For me the effect is most often triggered by a cup of coffee and a sudden exposure to bright light. The phenomenon is caused by a spreading wave of neural firing called a cortical spreading depression in the optical cortex in the back of the brain. It doesn't happen on the retina, as in a retinal migraine, which has a monocular effect.

Unlike some other kinds of migraines, there's no pain associated with scintillating scotomas, and I find them kind of fun, as long as I'm not reading or driving.