This portrait of a peasant girl by Swedish painter Anders Zorn (1860-1920) is unusual because the head is lit from two sources, one from the right and one from the left. 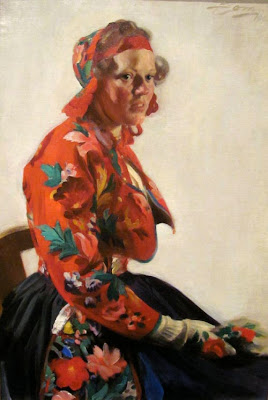 These sources leave a shadowed plane on the forehead and cheek, and a dark cast shadow on the nose. 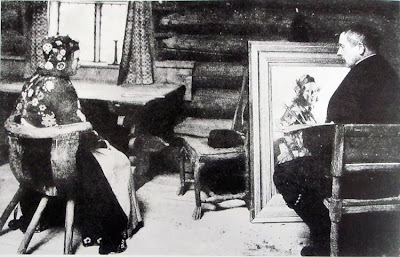 This photo shows Zorn with the painting and the model in the same spot he did the painting. There must be a large window or skylight behind the camera, as you can see from the cast shadow of the model's chair and shadow below the far chair which holds Zorn's hat. The secondary light source is the window in the far wall.

Was the photo taken while the painting was actually being done? Perhaps. Artists sometimes painted on a canvas in a frame. But it's also possible that Zorn and the model set up the photo after the painting was finished, and pretended to be working.

The painting "Peasant Girl" is in the art museum in Worcester, Massachusetts.
See lots of Zorns online at the Anders Zorn: the Complete Works