"Flåklypa Grand Prix," also known as "Pinchcliffe Grand Prix" is a Norwegian animated film from 1975. The hero is an eccentric inventor who builds an ingenious racing automobile. He is aided by his animal sidekicks, a mopey hedgehog and a perky magpie. Above is a short excerpt.
It is one of the most beloved and commercially successful films of all time in Norway, but it isn't as well known in other parts of the world.
Here's a trailer / teaser. It took Mario Caprino and his team of five artists almost 3.5 years to make the entire 88 minute film.

The animation technique was kept as a bit of a mystery to the audience and fellow artists. Some of the films that Mr. Caprino did leading up to Pinchcliffe were primarily accomplished with clever puppetry and animatronics. By the time Mr. Caprino did Pinchcliffe, he apparently relied more on stop motion. Some sequences of Caprino's films appear to have used blue-screen compositing, but otherwise it's all shot in camera. To modern audiences accustomed to digital effects, the results appear remarkably sophisticated. 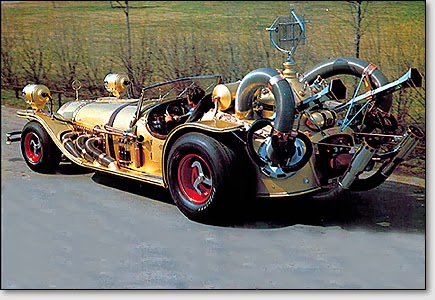 A full size replica of the car, known as Il Tempo Gigante was built to promote the film. The car has 550 horsepower and a real jet engine, but it can't be driven much because of EU restrictions.
Wikipedia on Pinchcliffe Grand Prix
Here's a link where you can purchase a DVD in PAL or NTSC format.
You have just read the article entitled Pinchcliffe Grand Prix. Please read the article from Sentimental Journey About Animation more. And you can also bookmark this page with the URL : http://sentimental--journey.blogspot.com/2013/11/pinchcliffe-grand-prix.html