skip to main | skip to sidebar
Home » Unlabelled » "This isn't how it looks."

When Lawrence Alma Tadema painted bathers in a pool, he chose to ignore the way refraction distorts the figures below the water, and painted the water surface like a semi-transparent veil.

This must have looked right to him and his collectors, but it looks wrong to us, accustomed as we are to fast action photography of water.

We often assume that all we have to do is look at nature to see it as it truly is, but in fact our perception of reality is even now bound by our culture. Given that our visual culture includes such things as movies that we can stop-frame, YouTube videos, selfies, and paintings of all sorts, our idea of what looks right keeps evolving, shaped by all these artistic forces. 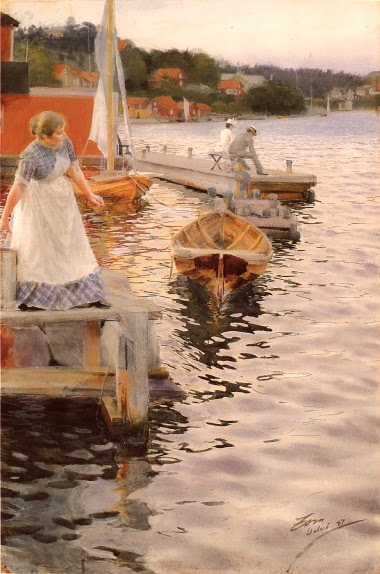 Here's another example. Anders Zorn's virtuoso watercolors of harbor views strike our modern eyes as extremely realistic. But according to Zorn's early biographer, "It is said that when these watercolors were first exhibited in Stockholm they aroused the anger of the older connoisseurs and called forth the usual phrase—'This isn't how it looks.'"

“When these worthies went down to the stream that runs glitteringly and playfully just outside the Academy of Art and really used their eyes in an unprejudiced way, they saw and admitted that young Zorn was right. It was a blow to the old formula for reproducing the motion of water. Zorn often had in his time the power of remolding people's way of looking, of exemplifying Wilde's paradox that 'life imitates art,' that is if art is the fresh product of a conception realized by the eye of genius.”
from Karl Asplund, Anders Zorn, His Life and Work, The Studio, 1921
Related post: Galloping Horses
Zorn exhibition in New York through May 18
You have just read the article entitled "This isn't how it looks.". Please read the article from Sentimental Journey About http://sentimental--journey.blogspot.com/2014/04/isn-how-it-looks.html