Former Monty Python member Michael Palin has won a devoted following for his travel documentaries on BBC, and he has also presented a few shows about artists, notably about the Danish artist Vilhelm Hammershoi.


(Direct link to YouTube video) In this hour-long video, he takes a look at the world of the American painter Andrew Wyeth.

With his characteristic humor and humility, Palin begins the story at the Olson farm in Maine where Wyeth created his enigmatic painting "Christina's World" and then travels to the locations around Chadds Ford, Pennsylvania that inspired the artist, including Kuerner's Farm and NC Wyeth's Studio.

The documentary presents archival family films of NC Wyeth, and of young Andy playacting in costume. Instead of limiting his interviews to scholars and academics, Palin talks to people who knew Wyeth: the son of his model Karl Kuerner, the farmer who buried him, as well as Wyeth's niece, and his son Jamie. Wyeth's widow Betsy apparently declined to participate. 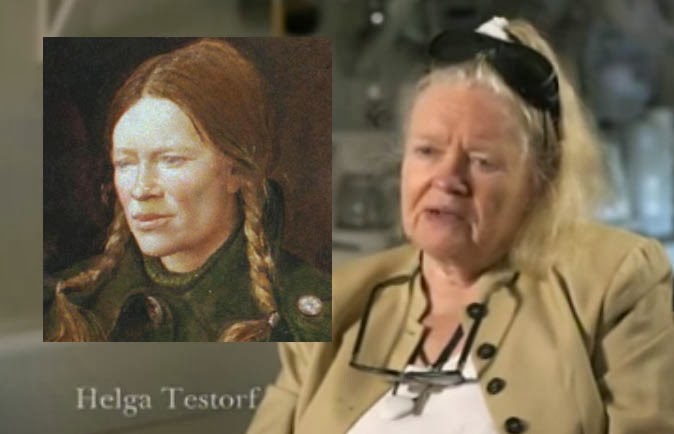 Palin conducts a sensitive interview with Helga Testorf, the model for the extensive series of figural works that Wyeth painted secretly over many years. Was Helga his mistress? Helga answers the tongue-waggers: "They didn't know any better. They did not know our language. We were not talking that way." Helga says that Wyeth wanted the work to be revealed after the artist's death, and that keeping their privacy during the ensuing scandal was a challenge.
The video was nicely produced, but I found the use of selective "artistic" blurring to be distracting and annoying—and unsuited to Wyeth, whose art was more about sharp focus, selective cropping, and limited color.